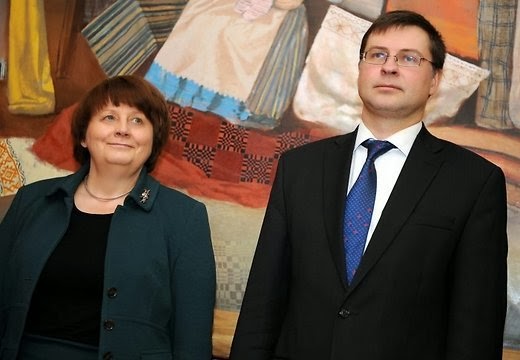 
On the 6th of January, Laimdota Straujuma, former agriculture minister, representing the liberal-conservative Unity party was invited to the post of prime minister by president Andris Bērziņš.

Women generally play a significant role in Baltic countries, we can think about Lithuanian president Dalia Grybauskaitė or former Latvian president Vaira Vīķe-Freiberga. Perhaps it can be associated with the strong roots of matriarchy in ancient Baltic culture, described by Lithuanian-American archeologist Marija Gimbutas.

Straujumas predecessor, Valdis Dombrovskis has stepped down after the collapse of the Lithuanian-owned Maxima hypermarket in Zolitūde, Riga, causing the death of 54 people.

With Straujuma's nomination, current political instability has come to an end. Earlier all candidates, proposed by Unity were rejected. Straujuma has become the member of the party after her nomination for the prime minister's post. Even the main opposition party, the pro-Russian Harmony Centre appreciated the candidacy of Straujuma, an experienced official as favourable for Latvia. As politologue Iveta Kažoka has noted, Straujuma has not been a noticeable personage as a minister, so it could be hard for her to become a widely accepted politician. According to these assesments, Latvia is going to have a technocrat as prime minister until the next elections.

Laimdota Straujuma (1951), doctor of economics has underlined the importance of preserving macroeconomical stability as one of the most important tasks of the new government. She also drew attention to the absorption of EU funds and the investigation on the Zolitūde tragedy and mentioned the problem of social inequalities which is a topical issue after the strict austerity measures Latvia has implemented during the past years.

Straujuma noted that new coalition partners had different opinions on several issues including residence permits and making Latvian the only instruction language in all schools. When speaking about ministerial posts, Straujuma proposed to create a ministerial position for European affairs. Current foreign affairs minister Edgars Rinkēvičs from Zatler's Reform Party will probably continue to work in the new government.

It now appears that the next ruling coalition will be made up of the current government parties - Unity, All For Latvia-For Fatherland And Freedom/LNNK, the Reform Party and the group of independent MPs, as well as the Union of Greens and Farmers, currently an opposition party. All these parties have expressed support for Straujuma as the next prime minister. Saeima is to confirm the new government in two to three weeks.

The next Saeima elections will be held on the 4th of October.

Posted by Beatrix Tölgyesi at 22:15