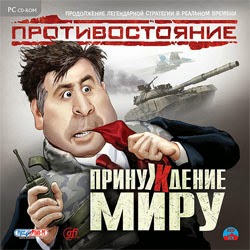 The soft power of computer games

Russian computer game Opposition: Forcing to Peace (Противостояние: Принуждение к миру, Russobit-M, December 2008), produced 5 years ago depicting the 2008 Georgian-Russian war provoked  outrage in Lithuania in recent days, as it tells a modified story of the war: Georgia tries to grasp  South Ossetia and Abkhazia, the NATO alliance, represented by Poland also interferes in the conflict, and Ukraine blocks Sevastopol fleet on the Black Sea. In this situation – so the interpretation – Russia cannot abstain from the war and deals a decisive blow.

„This game was created several years ago, the issue is already over. What is interesting about the case is that it is merchandised in Lithuania – says Nerijus Maliukevičius, professor of TSPMI (Institute for International Relations and Political Science).” He also added, that computer games about war are not distributed without any concept: special attention should be paid to the market in order to avoid politically awkward situations. If something similar is made on purpose, it is a tool of modern political propaganda.
Romanas Matulis,the head of the company which has imported the game, has clarified the case: the game was left from the stock from those days, when Russian computer games dominated the Lithuanian market. His company has bought a stock of another firm which has gone bankrupt and as he states, they did not pay attention to the content of the games. In his opinion, as every war game is against somebody’s interest, to examine these computer games from a political point of view is nothing else than sheer politicization.


The cover of the game presents a caricature of former Georgian president Mikheil Saakashvili chewing his tie. In the heat of the war, on 16 August, waiting for a BBC interview, Saakashvili once began to nervously chew his tie. This gesture was later mocked by various journalists and and also by Vladimir Putin; in a Russian news programme a psychocriminology expert interpreted it as an expression of his emotional instability.

www.delfi.lt
Posted by Beatrix Tölgyesi at 23:33