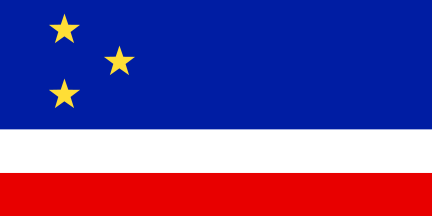 the flag of the Autonomous Territorial Unit of Gagauzia

Last week the National Assembly of the Autonomous Territorial Unit of Gagauzia in Moldova has decided on the creation of a National Guard, which is meant to be a self-defence force on a voluntary basis. There are also intentions to create own law enfomcement bodies, counterintelligence, business intelligence, and anti-terrorism units. So, it really seems that Gagauzia wishes to form an army of its own. However, it is not decided yet, if the self-defence guards will be armed; for the time being they will patrol with truncheons.

This decision was motivated by a raid of the police when 92 policemen in bulletproof wests and with automatic rifles examined several petrol stations of the Conan company, which belongs to a Gagauzian deputy. The company is suspected with tax evasion and other financial crimes.

Some local deputies, however, perceived this action as a threat to the autonomy of the territory, and they are afraid of provocations in the future, as, they say, the Moldavian law enforcement bodies are too politicized. They also added, that the events in Ukraine have also raised concerns in the region. Another explanation was the recent deterioration of public safety, the spread of petty thefts.

According to Russian news portal Regnum, on 15 March in the Gagauz capital Comrat a meeting was held, where Gagauzia was compared with Crimea and Kosovo, and the question was articulated, why Gagauzia could not have the right for secession. The Russian flag was also raised during the course of the meeting. 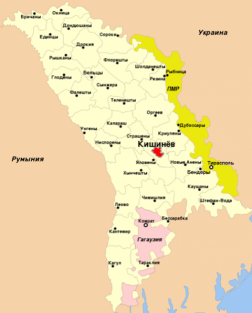 The Autonomous Territorial Unit of Gagauzia, situated in the south of Moldova, has a status which can be compared to the Crimea's. The majority of the population is Gagauz (82%), who are a Turkic people with Orthodox religion. Other nationalities include Bulgarians, Russians (around 6%), Ukrainians, while Moldovans make up only 5% of the inhabitants. Russian language is used as lingua franca in communicatoin between different nationalities and as the language of education.

Gagauzia has a history of separatism. As part of the Russian Empire, the territory has declared independence after a peasant uprising in 1906 as the Republic of Comrat, which existed only 6 days. After that, Gagauzia has been the part of various states: the Russian Empire, Romania, the Soviet Union, and, finally, Moldova. Following the collapse of the Soviet Union, Gagauzian leaders were concerned, that Moldova would be incorporated in Romania. Gagauzia declared itself independent in 1991. The unrecognized Republic of Gagauzia existed between 1990 and 1994, as a parallel of Transnistria. In 1994, leaders of the Republic of Gagauzia and Moldova agreed in the incorporation of Gagauzia in the Moldovan Republic with special authonomy status.

In February this year, a referendum, not recognized by the Moldovan authorities, was held in Gagauzia on European Union and Customs Union accesion. Organizers and the Russian press claim that about 97-98% of the voters has expressed their wish not to join the EU and to join the Customs Union and break away from Moldova if it loses its independence (clearly having in mind the EU accession). 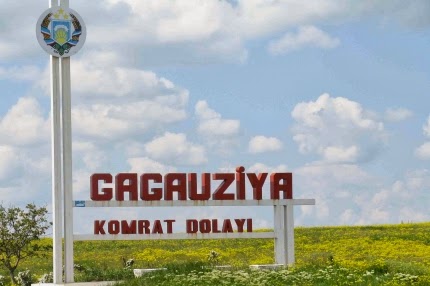 Moldova, of course, assumes that all these processes are backed by Russia. The name of a new political party the leader of Gagauzia would like to create is - hard to believe - Party of Regions, just as the party of Janukovich. Russia is clearly willing to maintain its influence in Moldova and to this end plays the ethnic card, just as in the case of the Crimea. What is the final goal of Putin with Gagauzia? To annex it to Russia like the Crimea? Not very likely, as in this case the whole Ukrainian Black Sea coast should be occupied. It is more feasible that he wants to turn it into a close vassal state like Transnistria or Abkhazia. It seems to be the part of a Russian offensive to regain the territories that once belonged to the USSR and to the Russian Empire. The representative of the Russian Federation to the EU was probably only swaggering about returning Alaska, Finland and Poland to Russia (I am not so sure about tha Baltic states though), but this clearly illustrates the current imperialistic thinking of the Russian leadership.

Posted by Beatrix Tölgyesi at 09:48