Is Russia planning to occupy the Baltic states?

As events in Crimea and east Ukraine are unfolding, both the Baltic countries and the US seem to be concerned about the security of the three tiny republics on the eastern border of NATO. The US has sent six F-15 fighters to Lithuania to complete the four other jet fighters regularly patroling over the Baltic states. In the weekend, Barack Obama had a phone conversation with the Lithuanian, Latvian and Estonian presidents.

The latest development is an online petition on the website avaaz.org, collecting signatures for annexing the Klaipėda County to the Russian Federation. On the same site, there is also a similar petition about the annexation of Latvia. (For Latvia, even financial benefits were promised in case of joining Russia.) According to the data given on the website, the initiative was raised by a certain Ivan D. from Cuba. It was published on the website of a local prorussian organization Būkime vieningi (Let's Be United).

The organizers aim to collect 10 000 signatures, yet so far they only have less than 200. 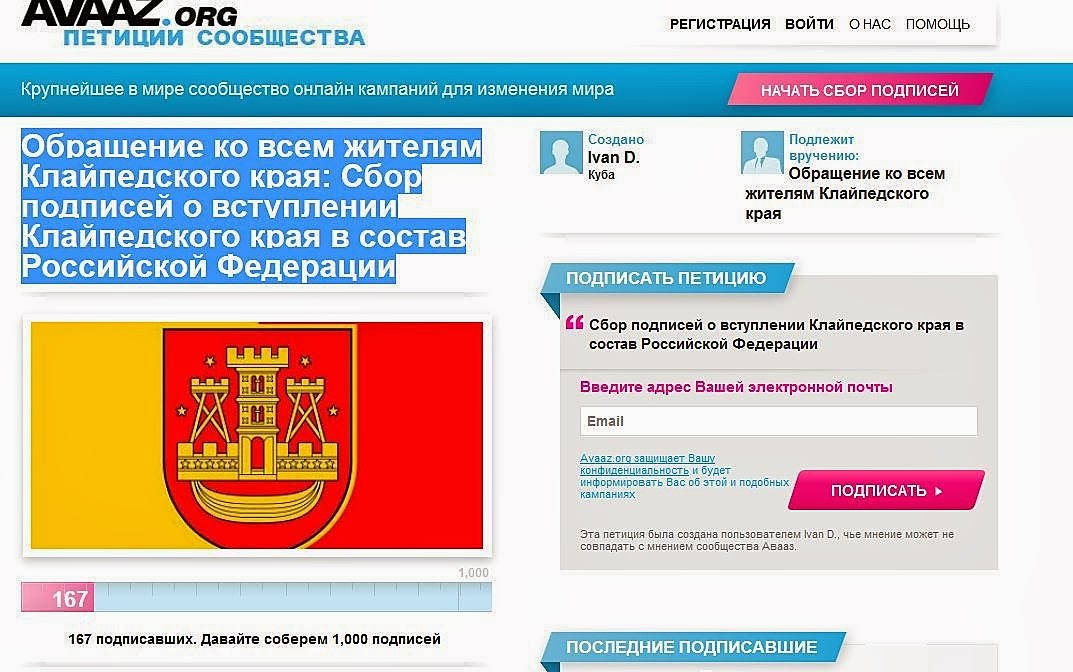 Klaipėda, which used to belong to East Prussia (Memelland) was occupied by Lithuania in 1923 by a Lithuanian revolt. In 1939, it was taken back by Germany, and then occupied by the Soviet Union, belonged to the Lithuanian SSR. After the fall of the Soviet Union, the region became part of the restored Republic of Lithuania. Klaipėda has a significant Russian population, about one quarter of the city's inhabitants. Motivating the annexation to Russia, the organizers of the petition state, that Russia has both moral and legal right to the Klaipėda region, as at the end of WWII, 130 thousand Soviet soldiers died during the liberation of the territory from Nazi Germany. (However, it was the Soviet Union, and not Russia.) The organizers of the petition also mention the discrimination of Russians in Lithuanian education system, that they are not allowed to use their mother tongue at school. It is a completely new grievance, as although some representatives of the Polish minoritiy have such complaint, we have not heard anything similar from Russians in Lithuania so far.

A small but important detail,  it was published just before the memoration day of restoring Lithuanian independence in 1990 (11 March). Head of the Defence Comitte of Lithuanian Parliament (Seimas), Artūras Paulauskas has said in an interview that this act can be regarded as an attempt to the territorial integrity of the country according to Lithuanian Penal Codex, and in this case it has to examined by the State Security Department in order to establish, who organised this provocation.

Among Lithuanian politicians, MEP and former head of the Seimas, Vytautas Landsbergis seems most concerned about the petition. In his speach at a concert on 11th March, he asked State Security Department to stop this provocation.

German foreign affairs minister Frank Walter Steinmeier tried to calm down his colleauges in the Baltics. He told them that the EU understand and shares their concerns, as these are Europe's common problems. He added that the European Union plans to react on the situation in Ukraine after this weekend's referendum. However,  Lithuanian officials hold the opinion that the EU is late to react to Russian agression in Ukraine.

Last week, the State Security Department of Lithuania has warned that Russia is preapring new informational attacks against Lithuania. On the 13th March the director general of Lithuanian secret services discusses the situation with head of state Dalia Grybauskaitė, and part of the report of VSD on this issue will be published. According to the informations of 15min.lt, it should reveal that it is Russia that represents the highest threat for Lithuania's state security, by the activity of the Russian embassy and local Russian communities, especially in the Klaipėda County, with the help of the local Orthodox Church.

Meanwhile, as a reaction to this initiative, another petition was started on avaaz.org, campaigning for the annexation of the Kaliningrad Oblast by Lithuania. The motivation is that the region is historically and culturally much closer to Lithuania and the EU than to Russia. 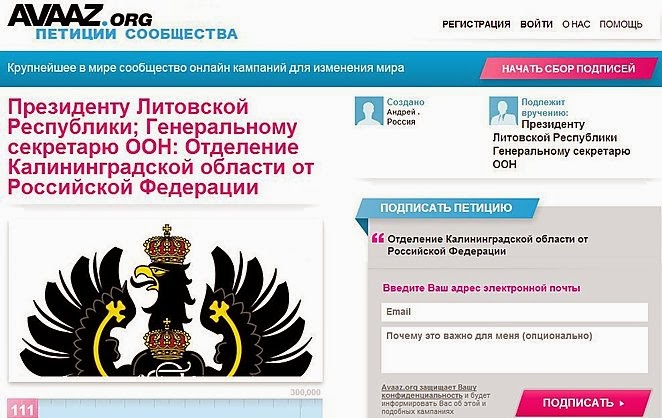 Posted by Beatrix Tölgyesi at 17:50